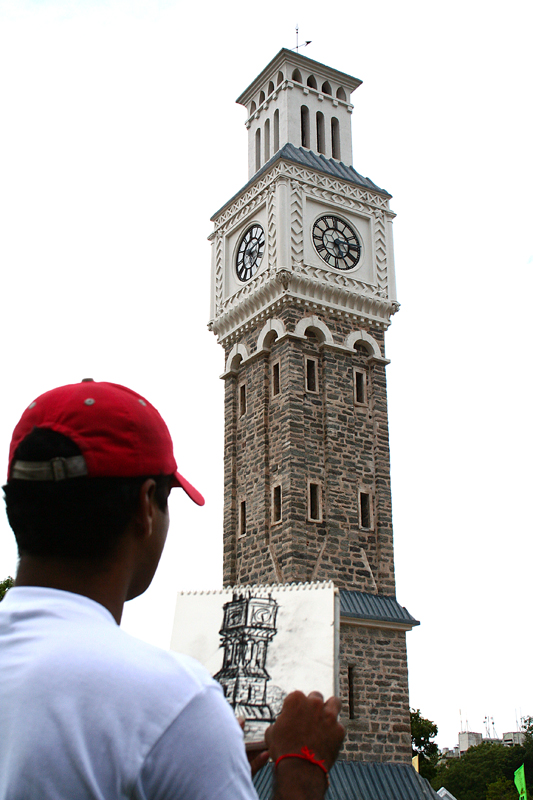 Last Saturday, 3rd June 2006, Secunderabad , the twin city of Hyderabad celeberated its 2nd anniversary. There was a grand carnival followed by performances at Parade Grounds. The clock tower, one of the oldest (constructed in 1860 by the Brits) is a symbol of pride for the people of Secunderabad. I will post some carnival pictures in the next few days.

".....May God make this grant auspicious for all the well wishers of the state in general and for your lordship in particular. By the grace of God this place has now been populated by the regiments and Cantonment. It is therefore required that it should be given a name. On account of the unity and co-operation that exists between our state and English Government, Secunderabad is proposed as its name and by this name it will be styled in future.
------ From Sikandar Jah Bahadur's letter addressed to Capt. Sydenham Bahadur dated 25th Rai-ul-Awwal 1222 A H (June 3, 1806).

Do you change something, the sky is white ?
This shot with the man drawing is more interresting than the clock alone.

Well, it was over cast and was drizzling a bit, it was low light, so in the process of getting the tower correctly exposed, the sky got white-washed. No photoshoping with the sky here.

Well, the sky is of the same color as the paper, so white sky on the photography and on the drawing make a good redundancy. :) The picture in the picture.

Given the situation, you managed to get the details of the subject and the tower perfectly. However, it would have been nice have some color in the sky ;-)

Hey, I'm glad you took the photo regardless of the weather conditions. The composition is very interesting. Hyderabad is one of my Dad's favourite cities in India. I hope to visit one day soon, perhaps even later this year.

Good idea to take the guy drawing the tower - it is a cool redundancy! Secondurbad sounds like a silly name for a twin city like naming a new city near Atlanta "Other Atlanta" :)

Do many artists frequent the tower?

Lovely shot Shuva inspite of the white sky. Including the artist in the frame was the real winner here.

Dear Friend: I am a historian of my native HyderAbad and compiling a Guide to Architecture in the twin cities. I am wondering if you would let me use this picture with credit to you as the photographer. My information is:
Dr Omar Khalidi
MIT 7-238
Cambridge MA 02139 USA
Phone 1-617-258-5597

Hi Dr Omar,
I wish you had left an email id. Aminus3 promotes the freedom of creativity, thus all content is under the Creative Commons License, allowing you to copy, distribute, and display any text or images found within Aminus3.com, provided that credit is given to the author and your work is not used for commercial purposes.